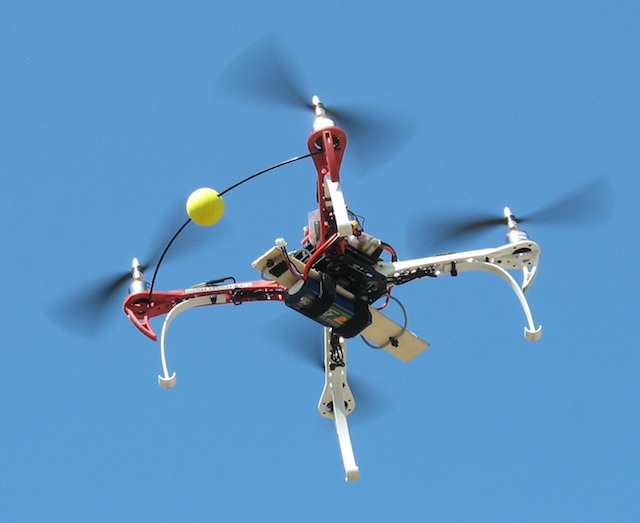 TonBar is a hobby project to build an average sized quadcopter with capablities for autonomous flight and a payload capacity for at least a light camera and video transmitter hardware. Current setup includes possibility for video recording and future expansions will possibly include a gimbal for the camera and/or video transmitter and screen/goggles for fpv flight.

This document will probably see several updates during the next few days or weeks. First version was published 15.7.2013.

I became gradually interested about multirotors and UAV after seeing my friend build one and helping a little bit with his projects. I then began collecting information about the subject little bit at a time. I read guides and articles and watched videos from youtube untill I felt that I had the neccessary knowledge to build one by myself.

The name is derived from a nickname some of my friends use.

In addition to a multitude of similiar project pages there is a web service that can be used to calculate and play with the parameters of the craft. It's here. The performance, flight properties and part requirements are a complex and convoluted combination of battery voltage, battery capacity, motor speed per volt, motor power rating, prop size and overall weight and I quess that I have not fully internalized the full implications and minute details of the equations. However, playing with the online calculator is fairly easy and it has a fairly comprehensive and accurate database of the components available.

There is a multitude of flight controllers suitable for hobby use. Majority of them are designed just for acrobatics or casual flying and do not generally include sensors that are required to make the craft capable of autonomous flight. Some FC:s can be expanded with sensor sets such as GPS, barometer and magnetometer. Personally I leaned towards Ardupilot, because it incorporates all the required sensors and abilities with an consumer affordable price and I already had previous experience with it.

ESC stands for Electric Speed Controller and it is the part responsible for driving a brushless electric motor. While browsing the HobbyKing site for suitable ESC:s I noticed the Q Brain ESC, which has four ESC:s on the same package. This makes things like power distribution a bit easier and it is a bit cheaper than four independent ESC:s. On the downside, if one of the intergrated ESC:s break down it becomes more expensive to replace, but I decided to take the risk.

HobbyKing has plenty of suitable size quadcopter frames and it is not too difficult to make one yourself. However, the prices for the frames are peanuts so I decided to go with the ready-made direction. There is probably nothing special about the frame I selected, but it seemed suitable, interesting and the price was good. It turns out it is also very durable; aluminium would have bent and wood would have shattered with similiar crashes this frame has endured. It can't, however, take a 15m dead drop on asphalt and you can't get just the fiberglass parst as spares even though they are the first to go.

The frame comes with all white booms. The red booms on my copter have been bought separately and installed afterwards.

The longer bendy legs are a custom modification. I needed them to make room for the anti-vibration camera mount, which is an applied version of the Anycopter camera rig introduced by the fine boys at Flite Test.

I strongly suggest using a thread-locking fluid on your screws, at least on the motors. I almost had a fatal failure on one the engines on the firt day due to screws falling off by themselves. The motor was dangling on just one loose screw when I finally noticed the situation. It could have crashed bad. The blue kind of non-permanent fluid seems to be sufficient, but no fluid at all is not.

I bought and installed some led strips during the end of september. I chose to go with the international standard for navigation lights for ships and aerial vehicles, that is, red on the left side and green on the right side. I also have white lights facing forward.

This is what I ended up with after trying to find balance and optimum between flight time and payload.

ps. If you are building one, remember to include a low battery alarm of some sort. Mine is not included on the spec right now because it broke during a crash.

When a quadcopter becomes incapacitated midair, it will fall nearly as fast as a brick. If it's high enough and you are unlycky, major parts will break. 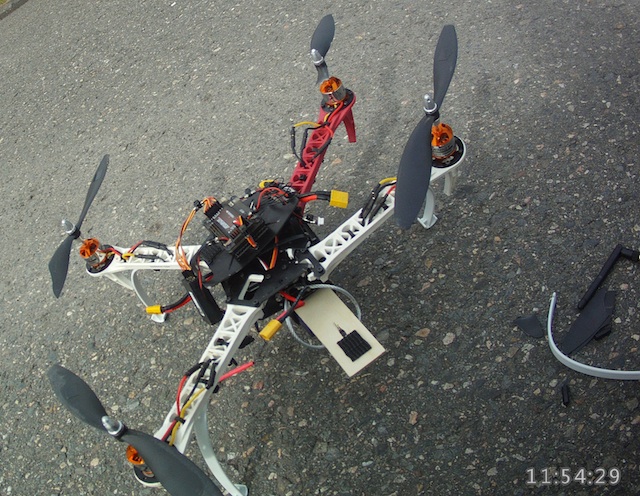 At this point I have had to make a major rebuild three times. Thus far I have bought four identical frame kits, spare electronics and batteries, two cameras and a spare APM kit. Most of the original electronics still work even after being dipped in seawater, but surely they have become in essence more unreliable. 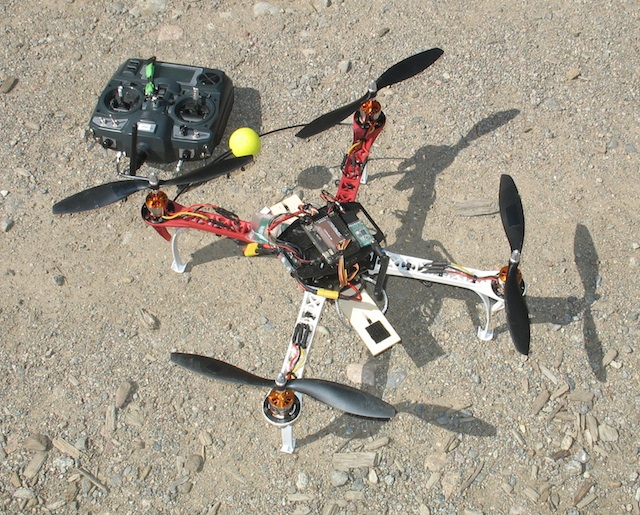 Does it run on electric power?

Did you built it by yourself?

I selected the parts and built it by myself, but it is not a ready made kit in by itself. The individual part are ready made and sold by HobbyKing and #DRobotics. The concept for multirotors is also not my invention.

How long does the battery last?

How much does it carry?

How high can it fly?

High enough. If I punched the throttle it could fly somewhere up to 500m before running out of power (a quick Stetson-Harrisson estimate). Untestable without destroying the craft and causing unneccessary danger. The aviation laws and regulations (in Finland) allow for a maximum of 150m above ground level without special permits and this height can be attained easily and has been tested.

How do you control the flight?

Multirotor flight dynamics is a complex subject but it entails differential motor speed control which is facilitated by a microcontroller and gyroscopes.The flight commands are transmitted via a normal off-the-shelf RC rx/tx pair and are fed to the flight controller board.

How hard is it to fly?

With correct settings, a trained monkey could probably fly the craft due to the very sophisticated flight controller. However, a person with no prior experience with RC flying would definedly crash. Practice with something smaller before taking up a quad or anything this size. That's what I did (and have still crashed a few times due to pilot error).

Does it have a camera?

Yes, I have a camera and I attach it whenever I want to take some video.

Does it transmit the image?

I do not yet have a video tx so it only records it on to the camera.

Does it have a gyroscope or something like that?

The APM 2.5 has integrated three axis accelometer, three axis gyroscope, three axis magnetometer, a barometer and an external GPS receiver. So yes, it has gyroscopes and some other things and it can navigate autonomously if set up correctly.

Could it be used to carry an antenna wire to a tree?

Maybe yes, but special care should be taken to ensure the wire doesn't end up into the rotors.

What is that yellow foam ball?

It's a visual orientation aid. The craft is almost symmetric in contrast to a plane which usually has a nose and a tail. It is really difficult to infer the orientation when it is far away. I also have differently colored booms, but in certain kind of weather circumstances you can only see a black silhouette anyway.

How much does it cost?

Initial costs for a hobby project similiar to this can be kept under 1000€ with some slack, but targeting below 500€ would be pure self deception. I have not calculated the total money spent at the time of writing, but it certainly has passed over the 500€ mark. Using the craft almost automatically implies costly repairs at some point.

An unasked question I still want to answer: Why english?

Because of international target audience. Also, you probably need english to be able to study the neccessary things to be able to build your own quad. I do not want to be responsible if someone somehow has the idea that this document is sufficient to make your own. For now I leave it to someone else to make comprehensive finnish instructions. See lennokit.net and wiki.lennokit.net for example.